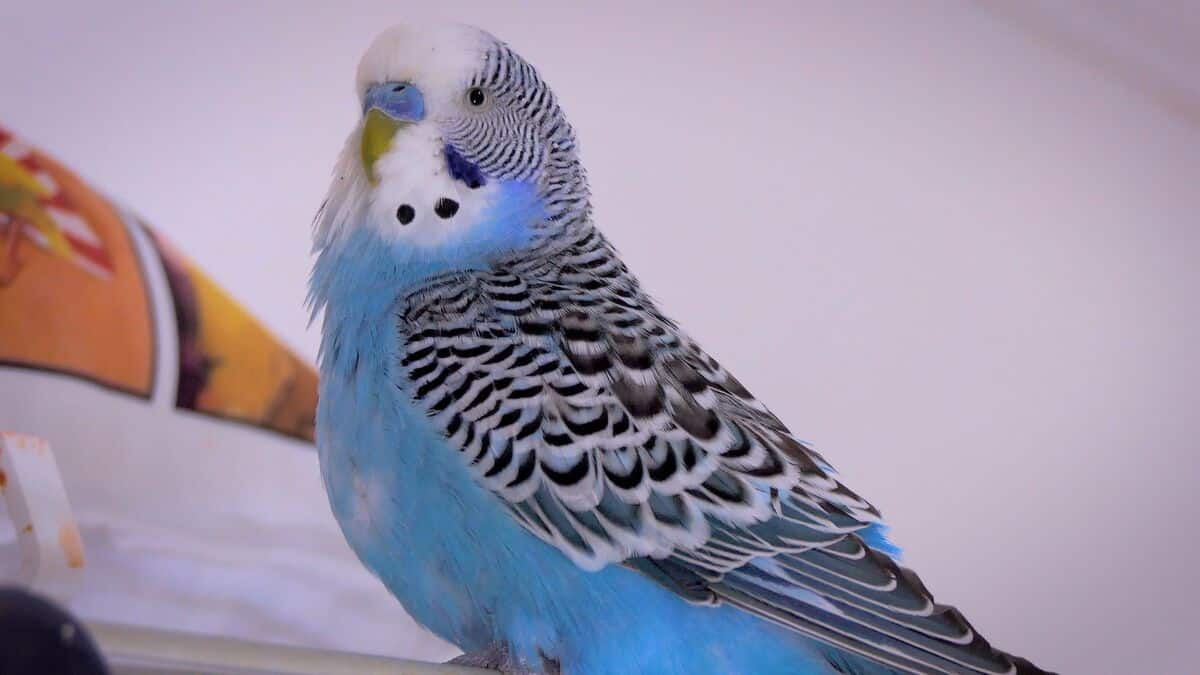 Blue budgie? There is an interesting story behind of most popular blue budgie, how did he become blue? Are blue budgies natural?

When we look at the living world on earth, we witness the enormous biodiversity it has at its disposal. Birds exist in many colors, differ in all visible characteristics, and come from the same ancestor.
Weird isn’t it? But only science can answer these questions.

Namely, the result of the diversity of the living world is the changes that occur in the genetic material. Any living being under the influence of various external factors, from biotic to abiotic ones, can change its internal genotypic characteristics, which can significantly affect the phenotype itself.

That’s why evolution is a key process in the creation of new species, but also a science that allows us to see the common ancestors of species that don’t look alike at all but belong to the same line in the phylogenetic tree.

Thus, in the world of budgies, certain mutations caused a change in the color of these birds, so that from the classic light green and yellow color, we get the blue color of the bird. The blue mutation was first mentioned in 1878 in Uccle, a suburb of Brussels, and the species is considered extinct. However, the blue budgie appeared again in 1881 in the Netherlands, after which they were again brought to the Brussels area.

Messrs. Mills and Pauwels exhibited these beautiful blue birds at the Horticultural Hall in 1910 and the Crystal Palace in 1911. These birds had a very high price because they were rare until about 1930, and their price was around £100 per pair. This amount could buy a quality car at that time.

What is the blue budgie called?

The blue budgie is named after the Cobalt budgie. Precisely because the element cobalt has a characteristic blue color. The blue budgie mutation is one of thirty known mutations in these birds that cause a change in the feathers of these animals, based on which numerous varieties such as Skyblue, Cobalt, Mauve, and Violet were created.

Blue budgies are nothing but the result of nature, and the action of nature and its biotic and abiotic factors on budgie genes. Simply by natural means, spontaneous mutations occurred that caused changes in the genotype of budgies, so a new breed of birds was created that no longer has yellow feathers but bluish. This type of mutation changes the light green color of the feathers to blue, while the parts that are yellowish in wild-type budgies now turn white.

The green color of the budgie is the result of the action of genes that produce a yellow pigment that is normally present in the cortex of the cells that form the feathers of the budgie’s entire body. When the blue mutation occurs, it completely inhibits the production of the yellow pigment.

The color of budgies’ feathers is normally a combination of different orange, red and yellow pollen pigments called psittacofulvine.

The blue mutation caused budgies to be classified into two categories: the green series and the blue series. Birds of the green series show yellow pigmentation, while the birds of the place series do not have yellow pigmentation. In combination with dark budgie feathers, the budgie becomes a darker blue color. The blue budgie with one dark factor is called the unique name Cobalt budgie, after the chemical element cobalt, which is naturally that color. The World Budgerigar Organization has given the standard colors of these birds using the so-called Pantone codes.

How do budgies become blue?

A scientific team from Stanford, led by Carls Bustamante, worked on studying blue budgies in such a way as to sequence their genome and conclude which gene mutation caused the budgie to change from its natural yellowish color to blue. By sequencing the genomes of these birds, they found an interesting gene that they named MuPKS, which when translated gives an enzyme that is key in the formation of the blue color in these birds, which is expressed in their phenotype. They then compared the genes of the yellow and green parrots together with the blue ones and came to the conclusion that all these birds contain the previously mentioned gene, but in the bluebirds, this gene had only one amino acid difference. In this way, it was discovered that blue budgies are the result of the replacement of one amino acid in the protein that codes for a certain gene and that all these parrots come from the same ancestor. That is why birds are an excellent example of how mutations and certain rules of inheritance according to Mendel give unusual colors to these animals.

This mutation is recessive, so if there is a dominant gene for yellow or green color at one locus, this bird will not be blue. Both genes need to be recessive for the bird to have a blue appearance.
So, blue parrots are not a miracle but are just the result of the accumulation of mutations in the bird’s genome, which over the years has evolved to change the phenotype of these birds.

How long do blue budgies live?

The color of a budgie does not have to indicate the lifespan of a pet. Your pet will live as long as possible if you take care of it and nurture it as long as possible. Everything else is very relevant. You must provide your budgie with all the necessary conditions for life, that you provide him with security and peace, and that you set aside your daily income for their food and toys. It is also necessary to give your pet time to play and socialize and train with it and provide it with an interesting life. They are social birds and can really get depressed, even die if they are not given enough attention. One of the key factors is also hygiene, that your pet’s cage is always clean and that you take your budgie to the vet for regular check-ups.

This is the only way for your budgie to live as long as possible, whether it is blue, yellow, or white does not have to be crucial in their survival. The key to your pet’s survival is you.
The average lifespan of Budgies is from 7 to 10 years.

Bluebirds have a wonderful spiritual meaning. It is said that bluebirds symbolize the essence of the beauty of living, and dreaming of bluebirds usually means happiness, success, and joy. Some people believe that if a bluebird flies into the house, they will receive some good news on the business trip or a raise.
Some people believe that bluebirds are the souls of the dead that fly freely around our world.

Since the dark factors in the inheritance were not present, the sky blue budgie is the lightest shade of the blue budgie. Technically, it’s just a lack of yellow pigment that, with the help of green, gave this beautiful bird its blue color. They have bright purple spots on their cheeks and dark blue tail feathers.

Mauve budgie is the darkest variant of blue budgies. The mauve budgie has two dark factors that have influenced the formation of the final pigment of this variety of birds. It is almost gray with a bluish tint. And gray and Muave budgies can be easily distinguished by the fact that Muave budgies, like all other varieties of blue budgies, have light purple cheeks and dark blue tails.

Budgies can be of various colors

Finally, we can conclude that the blue budgie is not a miracle or the result of some strangeness, but rather the result of mutations that happen every day in the living world. It is precisely these mutations that give us the colorfulness of the living world, which results in enormous biodiversity. Budgies can be of various colors, and these colors are the result of genes that produce certain pigments and give the color of the feathers of these birds. These colors can vary, as can mutations in genes, so if there is a change in just one amino acid in an enzyme encoded by a gene, there will also be a change in the pigment. It is the same with the blue budgie, only one amino acid caused the inability to produce yellow pigment, which is why these birds got their characteristic blue color.

Mutations can have negative consequences and result in the appearance of various diseases, but thanks to mutations we have different forms of life. By changing the genotype of the yellow budgie, we got a blue one. And isn’t biology such a wonderful science? Thanks to science, today we can answer a huge number of questions that arise every day in the living world.
Long live science and its followers.

2 thoughts on “Blue Budgie | How do Budgies Become Blue?”

Black Budgie or anthracite budgie is a unique and striking color mutation. This results in a dark, sooty-gray coloration that sets it apart from the more commonly seen green and yellow...

"10 Odd Budgie Questions" is a collection of curious and unusual questions about the popular pet bird, the Budgerigar. From their eating habits to their unique abilities, this article will explore...