Habitat and genetics play an important role in determining the body’s tolerance towards climatic conditions. For someone used to the snowy weather of Switzerland, braving hot and humid conditions of Singapore would be a challenge. And this holds for all living beings. budgie

Humans can brave a drastic temperature change by adopting various measures but with the other sensitive members of the family aka pets, there are always certain limitations, especially with the feathery members.

The most famous feathered pets in the world, budgies have had an extraordinary evolutionary trajectory. From living in the dry areas of native land to Australia, they have come a long way to adapting their bodies to brave all kinds of weather conditions, hot as well as cold. Whereas it is easier to brave humid conditions for them, the chilly weather tests their tolerance limits.

It’s been many decades that budgies have shifted to human habitats with varied climatic conditions and in the meantime, their bodies have adapted themselves to bear mild to chilly weathers. But then, they have their limitations. They are better kept indoors when the mercury dips to a harsh level. The conditions inside can always be controlled to the will of the pet parents. We all have numerous ways to keep our little birdie warm. Blankets, bird heaters, insulating the cage, or adjusting the room temperature by the thermostat, our sensitive bird will always stay protected inside.

But like budgies, humans have their limitations too. Situations may not be favorable and you might have to keep your budgie outside. Many of us are bird lovers and have not one but many feathery members. And this leaves us with no option than setting up an aviary outside when space is premium. But what if there’s too cold outside?

Can budgies be kept outside in winters?

An honest answer to this question would be a big NO. Budgies are sensitive little creatures who are not used to take an extreme dose of chilly weather. Keeping them outside can harm your little birdie in more than one way.

Catching respiratory infections is the first problem your little budgie would catch if encaged outside in the cold. Many bacteria that breed in cold conditions can attack the upper respiratory tract of budgie whose immune system is already susceptible to chilly conditions. The first few symptoms which will show up after the bacteria attacks would be in the form of sneezing, coughing, or runny nose. Though the sound of him sneezing or coughing is nothing similar to that of humans, but it’ll be unlike you’d have ever heard before.

Like us all, budgies will also start feeling the discomfort caused by a bacterial infection. They might prefer to stay at the bottom of the cage. Blockages in the nasal passage may cause breathlessness and they’ll start hanging onto the sides of the cage and try to take their nose out to get extra oxygen to breathe comfortably. You’ll see your bird panting a lot with an unusual sound.

Comfort your bird by giving him some instant warmth. You can wipe his runny nose with a tissue. And lastly, rush to the vet immediately, as unlike humans, budgies cold don’t get cured in a few days by itself.

Constant exposure to chilly temperature makes the body lose heat faster than it can generate. This makes the body develop hypothermia and it is a medical emergency. If not addressed well in time can be fatal for the bird.

keep your budgie from going into hypothermia, keep them outside till the temperature falls between their tolerance limits. The lowest temperature which must be maintained in an outdoor aviary should be around 15 degrees Celsius. If you happen to live in colder regions with temperatures falling below zero degrees, leaving the bird outdoors can prove fatal.

The maximum a budgie can stretch, though uncomfortably, is taking the chill by 4 or 5 degrees Celsius. But if the exposure is constant, he might slip into hypothermia. Beyond this, your bird might start falling unconscious before his condition worsens further.

Though the above-mentioned conditions can be fatal to your budgie but you’ll get some time in hand to bring the situation under control. But if the bird gets frozen outside due to a sudden shift in climate, he might die within a few minutes by freezing himself to death.

If you have an aviary set up out in the cold and you happen to live in an area where it snows in harsh winters, it’s not uncommon for the temperature to touch the negative spectrum. In such a scenario, it’s your paramount duty to keep the full aviary warm for your budgie and his cage friends. Follow various measures like installing bird lamps near the cage, placing heating pads beneath the surface of the aviary and also to cover the aviary with an extra warm blanket to retain the heat inside.

Signs your budgie has caught a cold outside

Even after taking all the measures to keep your budgie protected from cold and the related infections, it’s too cold and you doubt he might have caught an infection, look for signs to be sure and book a visit to the vet.

Biologically wired to tolerate hotter temperatures, budgies have been phenomenal in braving the harsh temperatures until now. That said, these little birds should not be forced to stretch themselves more each time. Many owners have argued that they are robust enough to withstand chilly weather. But are you ready to take the chance of testing your bird’s limits by playing a gamble on his life? Is it worth it? And what if you lose that gamble? And if you do, it’s not only the gamble you’d have lost by the end. So, better be safe than sorry. 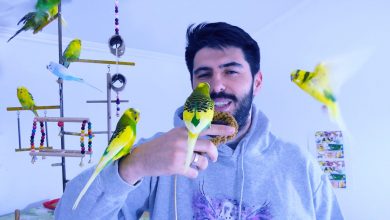 How to Regain Trust of a Budgie after you lost once 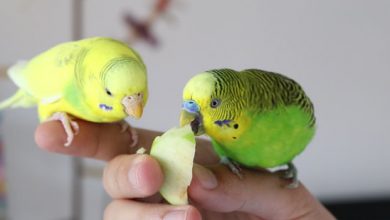 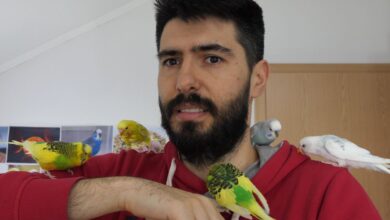 Do People live longer with Budgie birds? Do they make us happier?