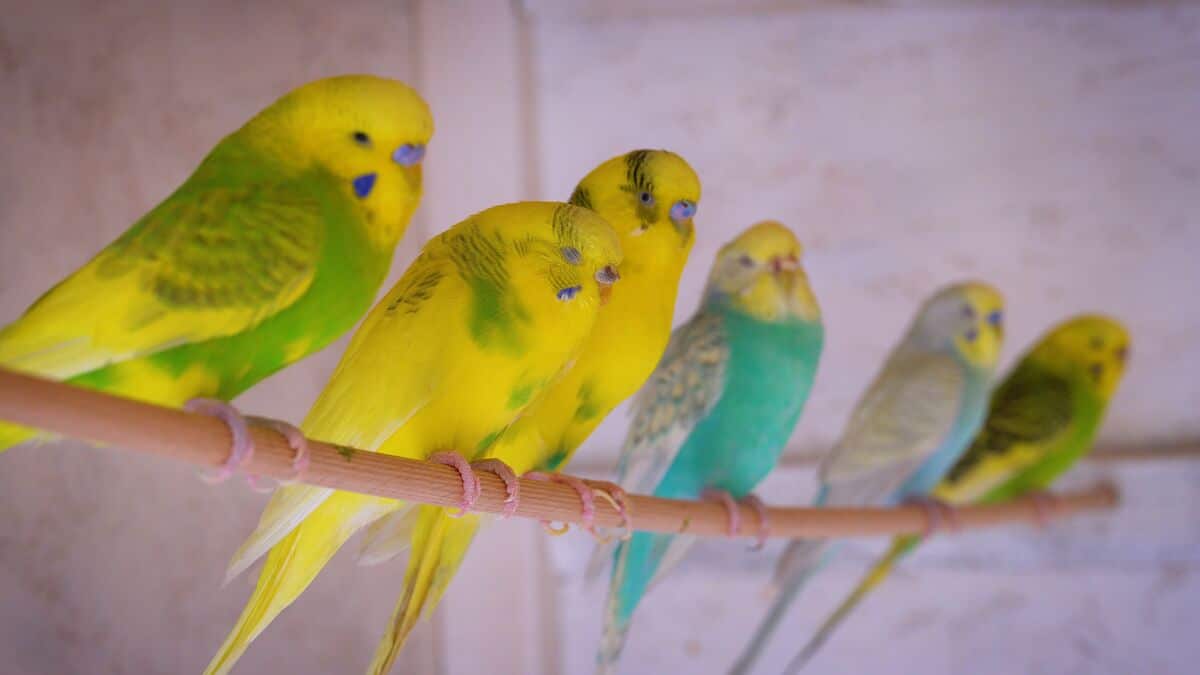 Budgies do show a huge amount of variety and diversity when it comes to the color of their plumage. This is perhaps one of the reasons why people choose them as their pets, precisely because they cannot resist their beauty and the unusual colors that adorn their appearance. The reason for their various colors can be the mutations that occurred in their genes, and of course, the genes of their parents also play a significant role.

They are most represented in blue, green, yellow, and white colors, but their feathers can be a combination of many different colors, which will make them even more beautiful and interesting. The rarest budgies exist in anthracite color and dark gray color. That is why they are unique and unusually beautiful. We will talk about them a little later.

Depending on what type of parrot you are looking for, and which color you like, the price of the parrot will be the same.
You have to know that these types of budgies are usually obtained through various mutations, so they are usually created by different types of mating, to get an individual of an unusual color, and because of this complex process, the prices of parrots are high and their value is very high.

What are the rare budgie colors?

Budgies come in many colors and combinations. But there are very rare colors, which is why they are in high demand, but also not very affordable.

Black budgerigars are very rare individuals in the world. This is because such gene mutations that cause their fur to turn black are very rare. These individuals usually have two more basic colors under the black stripes, which are usually blue and green. Also, their face can be painted black while the rest of the fur is blue or green.

Believe it or not, there are purple budgies. They are so beautiful that when you see them you will not be able to resist their beauty. However, they are very rare and do not exist in large numbers. They are most often found in dark purple or neon purple. Their cheeks are usually purple, but they can also be blue.

The duster feather parrot was created by a very rare genetic mutation. It is this mutation in their genome that has caused their feathers to never stop growing and can reach very large lengths. Because of those very long feathers, they are very weak and a year after hatching they unfortunately die, because they cannot resist the conditions of the external environment due to their appearance. They cannot fly and this makes it difficult for them to search for food, and allows predators to catch and injure them.
Also as pets, they are very demanding to maintain, their feathers must be properly maintained which is not a very economical move. Also, due to such long feathers, they are more prone to poor hygienic conditions.

The Japanese helicopter budgie is also a very rare mutation. They are so named because the mutation caused a change in the direction of growth of their feathers resulting in their wings looking like helicopter propellers. Another name for the Japanese helicopter budgie is Hagoromo, which means helicopter in Japanese, and it appeared in Japan in the 1960s. Because of these wings, even though it is named after a helicopter, it will not be able to fly well and will have difficulties. According to Buddhist Japanese ideology, Hagoromo is a spiritual being and is the name for a feathered kimono.

There are also rainbow budgies, and they got their name because their wings resemble a rainbow. They usually have a golden head, followed by purple, yellow, and bluish feathers.

Very rare mutations are lutino and albino budgies. Lutino budgies are completely yellow, their wings are lighter yellow, while the rest of their body is bright yellow. Most often, they have whitish cheeks and an orange beak, and rose-colored eyes. Albino budgies are completely white budgies. They look like tiny snowflakes or Cinderella’s beautiful birds. These parrots are very rare and therefore their price is very high compared to other parrots.

Anthracite budgies or dark gray budgies is the rarest parrot mutation in the world, which is why their value is enormous, as is their price.

The anthracite mutation is a very rare type of mutation. They were found in 1998 in Germany. This type of parrot was bred by Hans-Jürgen H. Lenk. This breeder has bred many parrots with this mutation.

These parrots have anthracite-colored back, bellies, chests, and flanks. The color depth is the same on every part of the body. They have black markings on their head, back, wings and neck. The basic color of the body is white or yellow, while black color forms the main part of the body. Their eyes are black, while their feet are greyish or bluish. The tail and flight fins are black, while they also have black patterns on the neck.

You have seen from the previous examples that all these more unusual colors are the cause of genetic mutations, however, the half-sider budgie is not caused by any genetic mutation. It’s about two different egg yolks being fertilized by two different sperm and then these separately fertilized eggs are combined into one. In half-sider budgies, this phenomenon occurs before the shell forms around the fertilized ovum, i.e. around the zygote. This fusion of two egg yolks fertilized by different sperm gives as a result a budgie that is colored differently on the left and right sides of the body from the central line of the body. Usually, one half of the body is blue and the other half is green.

This phenomenon does not only occur in parrots, it can be found in different types of animals, such as cats.

The lacewing budgie is also a rare type of mutation that closely resembles a combination of lutino and albino budgies. Due to the lack of melanin pigment, the typical blue or green color becomes yellow or completely white. The patterns on the cheeks, back of the head, wings and tail were, believe it or not, cinnamon-colored. Their feet are rose-colored, while their eyes are red. This variety of parrots began to be bred back in 1948. The first such parrots were exhibited in 1951 at the National Exhibition.

Rainow budgies are unusually beautiful and people are usually amazed when they see them. Their feathers usually feature combinations of blue, purple, and yellow. Due to their beauty, they are in huge demand, and their prices are slightly higher than ordinary parrots. They range from $35 to $90. If you find the right pair, you can grow them at home. Their colors, like water crayons, flow over each other, which is why they are unique. These parrots have four specific gene mutations, the combination of which creates rainbow budgies. There are also different variations of rainbow budgies, such as pastel-colored rainbow budgies. Their basic colors are diluted so that the main color becomes pastel. To produce a rainbow budgie, you need to know which genes the parents need to get this colored offspring. It depends on which gene is recessive and which is dominant and whether it is sex-linked.

As you could see many mutations give budgies an incredibly beautiful appearance. Depending on the genotype, that is, the composition of the genes of an individual and their expression, it also depends on what the phenotype will be, that is, the external characteristics of the parrot. All in all, from those monochromatic greens and blues, you can get budgies of various colors, such as anthracite parrots, which are the rarest in the world, which is why their value and price are high. There are so many different types of parrots painted in rainbow colors, lutino or completely yellow parrots, albino or completely white parrots, and many more.
This tells us that with the help of science you can get individuals with different looks.

However, to have a parrot, you need to know how to properly care for it and that you have enough time to devote to it. The color is not so important, just as the feathers do not make a parrot, neither do clothes make a man. So choose budgies according to your budget and according to whether you will be able to take care of him.

Do you want to know how to tame a budgie in 30 minutes? or Did you know lemon can be used as medicine for budgies