How many times did you ask Can Cat and Budgie Live Together? Well, I know I do, but let’s discuss first what this means in real-world situations.

Birds are termed as prey for the predators and those predators are Cats. Generally, it is not a wise decision to have a cat and a bird as a pet in the same house. But some people them all, they want dog, cat, and bird at the same time and can you imagine that they manage the favorable environment for all three pets. As long as you can take care of certain safety and important measures, there is no harm in keeping predators and prey at the same place.

Many people want to see birds and cats roaming around in the lounge of their house at the same time. But for me, it seems like you are putting a life in danger. How?

Cat is a predator of bird – the prey, so naturally, their match is like putting the life of a bird in the danger. Although, I know a family who owns two dogs (male and female), two cats (male and female) and their kittens and three parrots. Yes, it’s true and the amazing thing is that they have managed a perfect environment for all of them. Everything meets the desire of each animal they own. Sometimes, cats are found roaming back and forth the cage of parrots that has given me a shock of falling prey. But it had turned out to be very interesting to see that a cat can also play with the bird.

There is a sense of “hunt a bird” in the natural system of cats when they find out a bird is flying in their range that sense of hunter gets on their nerves. You cannot sense the moment when the bird fells prey to the cat. In one moment, you will watch your cat playing with your bird but all of a sudden, you will be catching the cat attacked your small bird. This is the main reason why people are afraid of having cats and birds.

Now, let’s talk about how harmful it is to have a Budgie and a Cat in the same house. Again, the budgie is a bird and the cat is its predator. The same reason goes for budgie if you are looking for a new idea. Cats love to attack something small and tiny; budgie is small and tiny. Yes, there is a type of budgie whose size is larger and can be safer to keep budgie that’s size is larger. On the other hand, smaller budgies are cute and lovable, they are preferable as pets.

Fun Fact for having a cat and a bird as pets:

The bird or large budgie that came from a wild environment can harm a cat. Such budgies are not admired by people to keep as pets because they are not friendly. Large budgies can also fly away when they find any slightest chance of running away. These budgies can also attack their owners even though budgie is considered a friendly natured bird. A cat cannot stay in a continues to fight with the budgie who can give a tough time to the cat.

Some practices for having Cats and Budgie Coexist:

In spite of the fact that predators cannot stay without attacking their prey. So when having such two species at the same place as pets, you will have to construct some precautions that can be helpful for species to live together.

Strong Cage of the Budgie:

Your foremost priority for securing a budgie from a cat is to get a cage that is very strong. Cat’s paws are very hard and can tear out any hard thing. It is important to a have cage of the strongest material so when you are not around, there will be no need to get worried.

It is not wise to place the cage on the table if it is light in weight. Even if it’s not light, still don’t make a mistake of putting it in the range of cat. Cat will knock it down whenever it will find you nowhere. Budgie is a parrot that loves to sing and it annoys cat so much, this could be the reason for your budgie’s end but there is no need to worry if the cage is out of the range.

Try to keep both of them in separate rooms which is difficult but it is a necessary precaution. You can first let them recognize one another and get friendly. After that, if you want to place them in the same room, you can.

This process takes time just like when a human tries to become a friend of another human. We want some time to know the traits of each other to develop a better relationship. The same goes for Budgie and cat, Budgie is of friendly and social nature. It can become a friend with the cat at once because the main need of Budgie is to socialize with someone it can regularly see.

But the cat, we cannot sense a time when it is being friendly and when it becomes angry. Cat has a moody nature with a blend of attention-seeking habits. A cat can surely harm its owner when he ignores the presence of it. So how can it share a room with another pet that is so adorable to have attention? But if the cat has developed a sense of Budgie as a family member, it won’t harm Budgie. It will become Budgie’s rescue at the time of need. So you will have to put some effort to let Budgie and cat become friends.

You, as being the host of cat and Budgie, have to show equal concern towards both of them. Animals do have hormones that cause sadness, happiness or stress. That is why it is advised by the veterinary doctor to show equal affection to the pets you own. Budgie is a very sensitive parrot specie, sometimes it sings out loud to seek attention from you. And sometimes, it keeps quite within its feathers to show its anger. So keep both pets happy is your duty.

Budgie in a Cage? Is it Cruel? 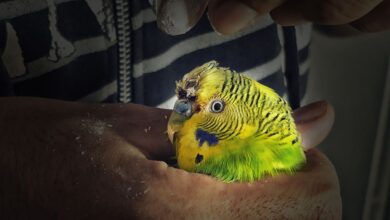 HOW TO STOP BIRD BLEEDING? Save your Budgie now! 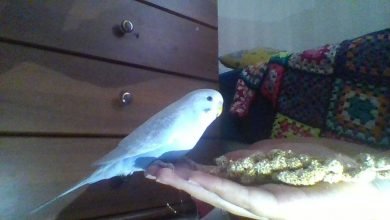 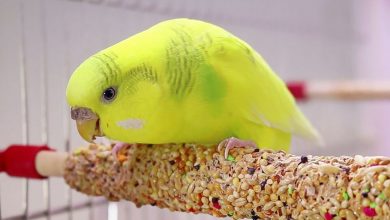 Budgie Food: Everything You Need to Know!