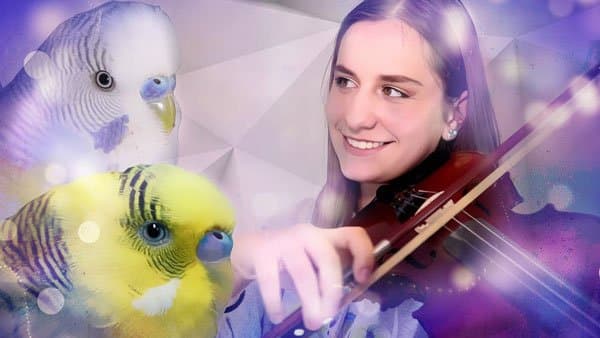 Budgies are very social and outgoing creatures. They love to bond with other budgies or with their owners, in case they are brought home alone. A lonely budgie doesn’t survive as long as he is not able to express himself. This makes it all the more important for the budgie owners to understand the sounds produced by their little friends and respond to these sounds accordingly.

The most pleasant budgie sound produced by the budgies is during their happiest moments. They tend to sing by creating high and low notes by mixing chirrups, whistles, chatters and various other sounds that they have picked up from their surroundings. They also produce chirping sound when they are happy and sometimes the group of budgies will even synchronize in their chirps.

This shows that they are content and happy with their surroundings. In such a mood, the budgie might also make chattering sound while fluffing up his feathers. Such chatter might include the words you taught him or even some phrases picked up from television. On very rare occasions, budgies might make clicking sound which is again a sign of their happiness.

There is quite an interesting sound that budgies make when they feel safe and are deeply content. They grind their beaks making a crackling sound. This behavior of budgie can be compared with a cat’s purr and indicates that they will retire to sleep very soon.

Budgie sounds and Your Attention

At times, your pet will call for your attention with a human whistle kind of sound. Whenever you hear such a sound, be aware that your little friend is missing you. If you are busy and can’t reach out to him immediately, don’t forget to answer him back with a similar sound to reassure him of your presence.

When your pet bird is not in a good mood, he will make a chiding budgie sound which is comparable to a loud hissing. Such sounds can be heard when budgie becomes defensive or territorial for their space in a crowded budgie cage. You might hear such sound from your budgie during spring and fall without any such reason. It is due to the rise in their hormone levels in these seasons resulting in irritation for them.

In case your budgie senses danger, he will call you with a squawking sound. He needs your immediate attention with such a scream. The reasons can be numerous like you might have forgotten to replenish his food, a neighborhood kitty might have entered his room, or he has just seen some danger outside his room’s window. Whatever the situation be, you need to calm him down and reassure him that he is safe and secure at his place.

There are many other sounds that budgies pick up from here and there. They are moderately good at imitating sounds and can astonish you with their skills at times. You can expect them to make a sound of a creaking door, microwave’s alert, gulping water and other such unusual noises. For instance, when they hear the sound of opening a door, they might respond with the sound of a door closing, or when you start your conversation on a phone call, they might try to imitate your closing conversation from previous phone calls.

Budgies are particularly in love with music but their taste may vary. They might have a favorite song which you can guess with the sound they produce with every music. Just observe your pet’s behavior and you will start understanding his likes and dislikes in a better manner.

One thought on “Budgie sounds – Meaning”

link to Did you know Queen Elizabeth had a Budgie?

You are right, Budgies are royal pets, Did you know Queen Elizabeth had a Budgie? I know you are probably just sitting on your rolling chair and sipping down a drink of mocha (with extra shots of...

Continue Reading
link to Male or Female Budgie to have as a pet?