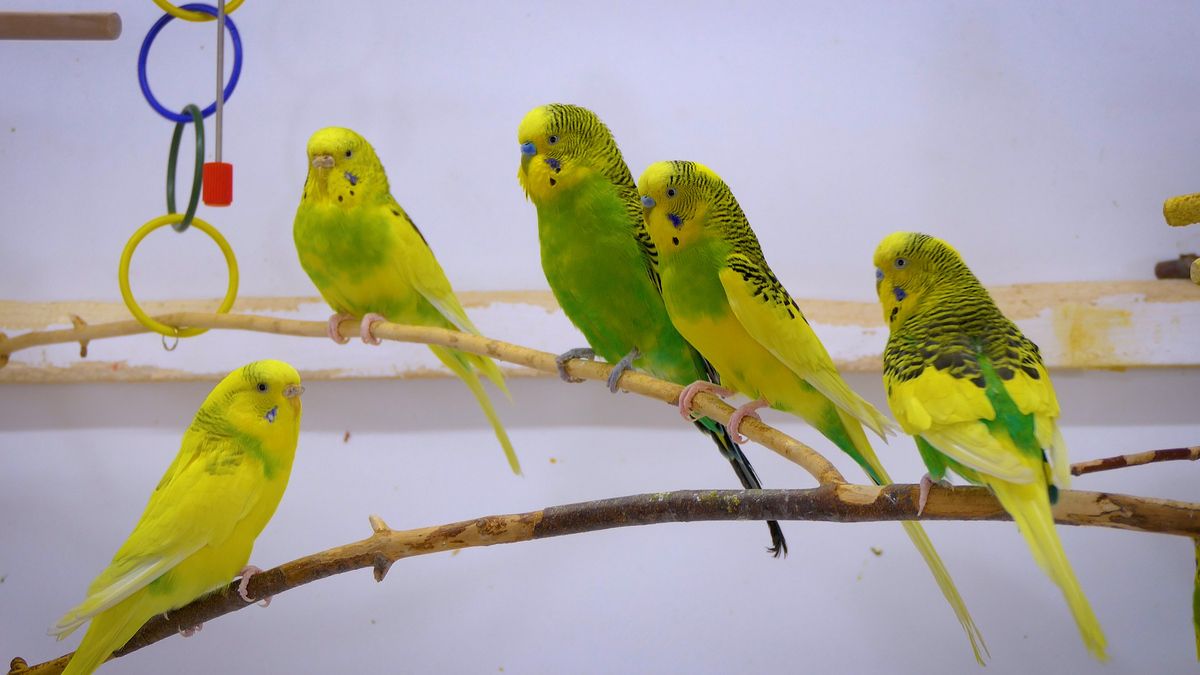 This article addresses those three means by which you can easily tell the age of your budgerigar. The ways only work when your budgie is still young. Afterward, you will just know he’s an adult, or you contact the seller.

Today more than ever, people are adopting avian pets. The parrots are great pets of the avian class. Among the avian pets, the budgies come second in the list of cheapest talking birds. Unfortunately, these birds sing, whistle, and talk but can never answer the question, ‘how old are you?’

Besides, budgies do not have grey feathers at the old stage nor get wrinkles. However, as the owner, you still want to know how old your bird is. Even if you cannot tell the exact age, you want to know the rough estimate. That’s fair, and there are ways, I mean the easiest ways through which you can tell your budgie’s age.

Observe and inspect the budgie’s forehead

The forehead or the cap proves to be a reliable means of telling a budgie’s age, more so if the bird is young. This is the interpretation for the conclusions one can make after observing a budgie’s cap.

Striped cap for a young budgie

a young budgie will have stripes on the cap’s feathers. The bars are black or brown striped with yellow, red, blue, white, red, green, or any color that dominates your budgie’s body. If you notice these bars on the forehead of your budgie’s feathers, then you could safely tell that the budgie is about three to four months. Some birds will mature faster and start showing age and gender early. Therefore, some budgies will have conspicuous stripes on the cap even before attaining three months. This is typical of budgies that grow in the aviary.

The stripes may not necessarily mean that they are three or four months; they could be younger than that. In fact, there is one budgie at KM & Breeding that developed clear stripes at 50days (1month, 3weeks 6days old)!

Consequently, when your budgie moults, he is three or four months and above old. The process sees the stripes at the bar removed and clear, stripeless feathers set in. The cap will be entirely white or yellow, which depends on the type of budgie you own.

After four months, you can no longer rely on the feathers’ appearance at the cap or forehead to tell your budgie’s age. You will just know that the budgie is four months and above old. However, you will not be able to tell the exact age.

The exception to this

the nature of the cap’s or forehead’s feathers cannot be used to tell the age of all budgies. This method will not be applicable for some mutant types. For example, the Lutino and the Albino budgies will not have bars at any time in life. Instead, they will have clear feathers on their capes.

Consequently, one cannot tell their age by looking at the appearance of the cap. Other methods have to be applied to determine the budgie’s age. The recessive and the pied budgie types will also lack the stripes. Hence, one cannot rely on the markings to tell their age.

Another easy method to tell your budgie’s age is by observing his eyes. One can inspect the iris and the pupil to determine the age of the budgie pet. By observing the eye, you can make the following conclusions;

a young budgie will have stripes on the cap and an entirely dark iris. If you keenly observe your budgie pet and notice that his eyes are coal dark, you can safely assume that the budgie is three or four months and younger. As was the case with stripes, the eyes could be dark when the budgie is still young. The dark iris observation only applies to the non-recessive pied and the non-dark-eyed budgies. The recessive pied and dark-eyed variants will have coal-black eyes throughout their life. This means that they could have a completely black iris but could be way older than three or four months.

A hint of an iris ring for 4-6months

as the budgie gets past four months, the dark color lessens, and he starts developing an iris. This hint of iris ring applies to the budgies that are not recessive pied or dark-eyed. This owes to the fact that these mutants will never develop a ring throughout their life. Their eyes will remain cute and black from the time they are hatched to when they die.

the older the budgie gets, the more conspicuous the rings become. Between six and eight months, the iris ring becomes clearer. At this age, the ring is visible without a struggle. When you can clearly see the ring when you are close to the budgie in a room with better lighting, you can estimate the budgie to be between six and eight months old. Although visible, the ring is not very bright. You cannot use this criterion to estimate the recessive pied, dark-eyed, Albino, or Lutino budgies age. These will have black iris throughout their lives and no iris ring.

from eight months upward, the iris ring becomes brighter and brighter. In fact, you can clearly see a white ring in the eyes. At eight months and older budgies, you don’t struggle to see the iris ring. It has clearly formed, and it is even visible without going to a better lit room. Besides, you don’t have to get too close to the budgie to see the iris ring that is now exceptionally white. Again, the white iris ring will not be present in the recessive pied, Albino, dark-eyed, and Lutino variants. You will inspect their eyes, but you will not notice any ring no matter how old they are.

Observe and inspect the budgie’s beaks and ceres

an extremely dark-colored pigment on the beak of a budgie means he is still young, probably three or four months and below. The excess pigmentation owes to the fact that the budgie has not grown old enough to have all its pigment absorbed by the body. The beak could be excessively purple or red depending on the mutant type the budgie is.

The young budgies also have excess melanin, which the body has not fully utilized. Consequently, the cere will be blacker than normal when the budgie is four months and younger. The pigmentation on the beak and the blackening of the nose (cere) have different levels depending on the mutation and age.

the older the budgie becomes, the more the pigmentation normalizes. When the bird gets to four months and above, the pigments on the beak recedes, and the beak adopts a normal color. The melanin in the cere also gets absorbed by the body, resulting in a normal-colored nose.
The exception to this criterion- there are cases whereby the excess pigments in the beaks and the blackening of the ceres cannot be used to estimate the age of a budgie.

This is for the budgies that have been raised in the aviaries. These birds grow fast, and the melanin and the beak pigments may start receding even before three months. In that case, using a normally-colored beak or nose to indicate four months and above will be highly inaccurate.

Other ways to tell a budgie’s age

Apart from observing the beak (and ceres), caps, and iris, there are other means of approximating a budgie’s age. These are;

If the seller sourced the bird from a reputable breeder, he is likely to know when the bird was hatched and will tell you.

Observing the band on the budgie’s leg

Budgies from reputable breeders and aviaries will have a band on the legs. The band can help you know when the bird was hatched if the company is a member of the American Budge Society (ABS). On the ABS website, you will get the interpretation for the band color. If the company does not belong to ABS, you can explore the Internet further and interpret the band color.

You could also estimate a budgie’s age by monitoring his behavior. Budgies tend to be less active as they grow older. If your budgie is not very active, he could be 7,8,9, or 10years. However, inactivity is not generally assumed for old age as budgie may slow down because of sickness. Taking him to the vet will help you clear doubts.

So how old is your Budgie?

Many budgie owners always want to know the age of their budgie. Unfortunately, the only way to tell a budgie’s exact age is by contacting the seller, who will provide the information if he sourced the bird from a reputable breeder. Such breeders can tell the exact date when the budgie was hatched. Even the band on the leg may not be very informative as it will inform you about the year only (not month and date).

However, the three easiest ways of telling a budgie’s age involve examining cap, beak (and ceres), and eyes. These methods will only help estimate the age of a budgie who is one year and below. The methods will not work for Albino, Lutino, dark-eyed, and recessive pied mutant types.