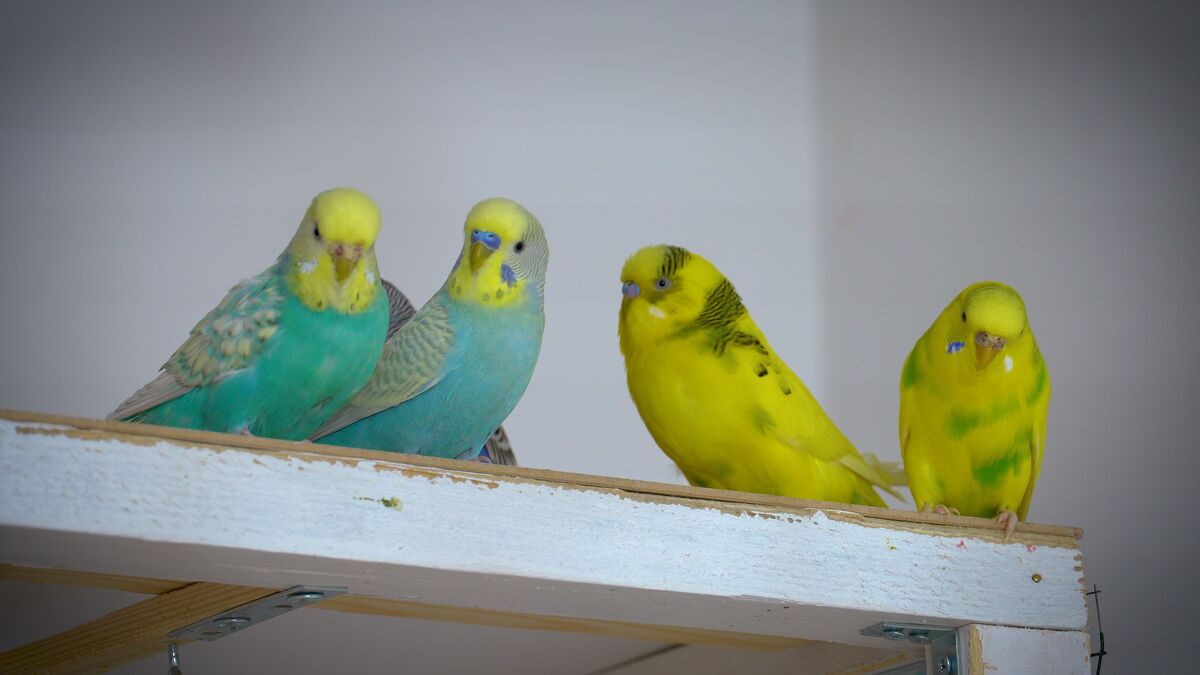 Do budgies talk to each other? Do they have budgie language or how do they communicate with each other? btw. There is a budgie translator too, how awesome!

Budgies are small birds that are very social and that enjoy the company of other birds. To maintain good relations within the community in which they live, they need to communicate with each other, just like with people. So there is a huge range of sounds and movements that they produce to communicate with other individuals within the population.

There are a lot of sounds that these birds produce, so by listening carefully and noticing the differences in these sounds you can know what your bird wants and how it communicates with other birds. With the help of these sounds, you can also know the condition of your bird and whether it is in the mood or not. Of course, a happy and contented bird will produce characteristic sounds compared to a sad bird that is missing something.

To talk to each other budgies produce a wide range of sounds, such as whistling, chirping, contact calls, chatter, and the like.
Whistling is the most characteristic sound that these birds produce, it is the so-called sound of happiness because by whistling the birds show that they are very satisfied. So parrot parents train their offspring to whistle together to show pleasure.

Singing is also the sound that these birds produce, which also indicates a good mood.

While of course there are sounds they produce, which indicate that something is wrong with your parrot and that he is missing something. These are sounds like screaming, which indicates pain or that your bird is hurt, fear of something or anxiety, or maybe even disagreement inside the cage with other birds.

Do budgies have a language?

Budgies have specific body movements and sounds that they emit when communicating with other birds. What can be for them is budgie language, that is, the language in which they express everything they want, which is the purpose of the language itself.
However, when we talk about budgies, we can say that they are very smart birds that can remember human phrases and words.
Recent research has shown that they can choose certain human abstract phrases and sentences and completely imitate them.
This makes these birds, the first non-human species to have the ability to understand the grammar of the language as the complete complex unit of each of the languages.

Scientists have shown that these birds can learn complex songs and sing them in multiple voices and melodies. However, this could be precise because these birds live mostly in communities and are social so this wide range of learning different musical tones and songs allows them to recognize each other within the groups in which they live.

Do budgies communicate with each other?

In addition to expressing certain sounds, they can also do so with characteristic body movements. For example, if a parrot waves its tail and back, it means that it is very pleasing to see you and to be close to it.

Budgies can also produce certain sounds with the help of their beak. For example, by grinding, they show that they feel relaxed, by clicking their beaks, budgies show that they want to protect their egg from something that wants to attack them, that is, from a possible predator.

What do budgies say to each other?

Budgies are very sociable birds, they can of course live alone in a cage, but they will be much happier if they have a friend next to them with whom they can spend time. Just like people!

Budgies like to communicate with each other to express their emotions and how they feel at a given moment. In addition to expressing their emotions, they can express and see when they are in potential danger and thus convey to other birds to take refuge in a safe place.

As the mating time approaches, they also emit certain sounds, to attract the opposite sex close to them.

If you have budgies of the opposite sex inside the cage, and you hear them imitating sounds to each other, it means that they are in love. Oh yeah!

The more often they call out and imitate sounds to each other, the more deep their love is.

Believe it or not, a budgie language translator exists. However, the relevance of its use has not yet been proven.
Scientists who deal with birds know that all animals in the world have a specific way of communicating with other individuals, and so they simply know what a certain species feel at a certain moment.

This can be noticed only by long observation of nature and engaging in science.
Like all other animals, birds have specific sounds that they produce, with which they simply express their emotions and based on which they perform certain actions or attract other birds near them.

Thus, by observing birds, scientists have created special codes within a specific program, the so-called ML model, which understands emotions in different animals and classifies them based on that. The ML model correctly collects data on sounds and thus converts them into code specific. In this way, you can download different animal sounds that represent a certain emotion or pattern of behavior.

Is it cruel to play budgie sounds to a budgie?

There are many discussions on this topic. But one thing is crucial. You need to observe your birds when you play other birds’ sound recordings to see their reaction.

This will tell you if your bird is irritated and frustrated when making sounds like this or is happy after all.

The bird becomes irritated and aggressive, and even sad if it responds to the chirp that happened on the soundtrack, thinking it is another bird, and then when that chirp is not returned to it, it expresses these stated emotions. However, if you see that your bird is very happy, then just keep making those sounds.

Primarily if your bird is alone, and budgies are very social birds, so they can very quickly be lonely and sad about it.
Of course, it would be better if you had the conditions to buy another bird that will be a friend of your budgie.

Logically, this sound could deceive your pet if he is not alone and has company. Which can have its advantages and its disadvantages. But as has been said, it is crucial that you observe birds when making such sounds and thus monitor their behavior, while seeing what patterns of behavior your budgie exhibits.

If the behaviors are negative, then you need to stop making sounds, and if you can get a friend for your bird. The advantages of this method are that you can keep the bird entertained in this way, during which it feels less lonely, more comfortable and gets used to the new environment faster.

Budgies are born and raised in many flocks, so they are emotionally attached to the sounds they hear. So if they are too sociable, then this sound option can be a big advantage for them, especially if you can’t be with them for a long time because of work.

If you have acquired a parrot and there is no company, it can be very difficult for it to adapt to the new environmental conditions.
So he may refuse to eat and drink. So you can let him make these sounds and try to cheer him up and relax. You can see that the parrot is satisfied if your parrot sings, or whistles, which of course indicates that he is very happy and that he likes the surrounding sounds.

All in all, you can conclude that your bird is happy if it has a friend next to it, sometimes that friend can be that “soundtrack”. However, of course, social birds feel better if they have someone in their cage next to them. So they communicate in a variety of ways. At the end of the story, the most important thing is that your bird is happy and content, even if they make sounds that will make them happy.

Budgies communicate in different ways, so they express their emotions. So they can express when they are in love, when they want to mate or that there is a certain predator nearby that wants to attack them.

In addition to helping himself with certain sounds, he can warn other birds in the flock that the predator is close and find shelter. Isn’t that wonderful?

If they have a friend in a cage, they can be entertained for a long time, so you don’t have to be constantly close to them to make them happy. Especially if you work and if you don’t spend most of your time at home.
With the sounds they produce, you can know the emotion they are experiencing at a particular time. So listen to your birds. To know how they feel at a given moment. Maybe he’s in pain, maybe he’s afraid of something, and you’re not aware of it. You can detect just that with sounds.

One thought on “Do budgies talk to each other?”