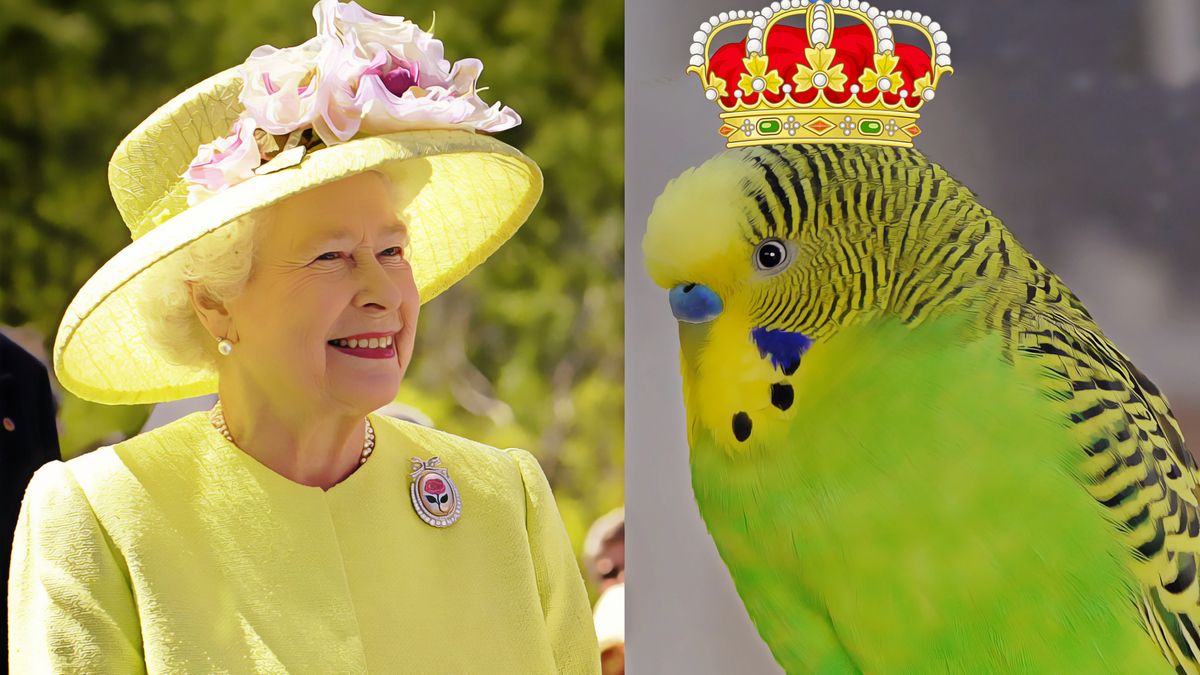 You are right, Budgies are royal pets, Did you know Queen Elizabeth had a Budgie?

I know you are probably just sitting on your rolling chair and sipping down a drink of mocha (with extra shots of sugar, because why not? Hey, you! What do you imagine when you are given a thought of the royal life – the life in which queens and kings are raised?

I know what you thought about, lavish lifestyle, breathing just extra clean air, never wanting anything (because they always have everything), right? now, tell me what birds do you think they had? Swans, Red-crowned crane, Spix’s macaw, and something out of a Disney movie, I would have thought that too – but I am sorry to break it for you that Queen Elizabeth had Budgerigar birds.

Just when we thought we had something figured out, something is always there standing at the corner just waiting to hit us in the face. Who would have thought about a budgie – if you were to ask me, I would have said Unicorn (even though it is not a bird).

Remember when we all thought we looked cool wearing pointy glasses at the age of 10, it felt as if we were the David Beckhams of the world – but guess who actually was? The budgie bird who got queen Elizabeth at her young age. Imagine being a bird who gets to stroll around the winds close to the royal atmosphere, it just keeps getting better.

The young Princess Elisabeth when she lived at 145 Piccadilly she played all day with the family pets and also the budgerigars.

For all of the people who are living under the rock (or always on some secret website around the world) who don’t know about Budgerigar birds, I can make you guys understand by just saying that these are the royal birds, but I will dig a little deeper for you. The Budgerigar birds are one of the smallest parrots that are usually kept as pets.

In addition, they are the most popular birds due to them being easily available and because of their low cost (how we all thought that the royal bird would have gold feathers and silver beaks). The best part which I think Queen Elizabeth thought about was that these small parrots are very friendly and easy to tame before she got hooked onto them. (Having talking pets? Who would turn down the chance of having them? Maybe the one aunt with severe allergies).

I am going to try to make this a little dramatic but the story stays true. Queen Elizabeth was gifted two Budgerigar birds in 1930 when she was young. If I were to make a scene out of this, I would just imagine her in her room all alone and just teaching these two birds how to talk. Well, to the surprise of people these two have grown to be hundreds of birds now.
The love for her birds is as famous as our love for Doritos and Nutella – but have you saved any lives? You? Mr. ReadingThisArticle?

Graham stone said that Queen Elizabeth saved the life of one of those birds back in the days of her fire and beauty. ‘I know she likes to see them when she is at Windsor. In fact, it was her vigilance that saved a bird once.’ Said Graham. Queen Elizabeth got minor crack in her heart when she saw a budgie with its leg stuck in the wire cage. She couldn’t stop herself from running to help and alerting on calling the vet.

We might see her now as being the lady who is being isolated in the royal never-ending mansion but there is more to this side of her and those lucky Budgies.

These birds are actually lit:

The only thing I remember in my young years is the times when I would hit high school just so I could see my crush every day. I didn’t know there were birds who were getting the best care – that too from the royal family. If we had to see the whole thing from the lucky bird’s perspective, I would just say that it was luckier than the person who gets two yolks out of a single egg (this has never happened to me).

If I were to swear by the third eyelid of budgies, I would just say that they made history by being the love of Queen Elizabeth back in the days. Oh, third eyelid? yeah well – they are blessed with third eye lid which is usually not visible, which keeps their eye clean from dirt.

Maybe this is what made them see queen Elizabeth as their prey for the hunt of affection and love – that too, with a lot of lavish styles. Do you know what else I think made it easier for them to get Elizabeth? Their acute vision. The number of images their brain can process is over 150 per second. Doesn’t seem enough? Well, guess what? Humans can only register up to 16 images per second. (how I wish I had these incredible acute visions, maybe I would have been the adopted son of Queen Elizabeth).

Things You didn’t know about Budgerigars

Do you know that I am actually hitting you with fun facts about these tiny little parrots? Well, here comes more! Do you know that these amazeballs are capable of learning how to count up to three? I would have literally skipped dates and classes to teach them this. So, if you think you can fool a budgie by hiding one treat out of the three, they eat in a day – they won’t probably let you sleep by yapping day and night in the room to let you know that you cheated.

And counting is just one of the things they can learn. You can teach them how to talk, even more easily than when you are literally begging your first baby to say dada for the first time. Well, here is a little hint. Having kids might take some serious planning or accidents but Budgie never hurt anyone. You know exactly where to invest, my friend.

One thought on “Did you know Queen Elizabeth had a Budgie?”