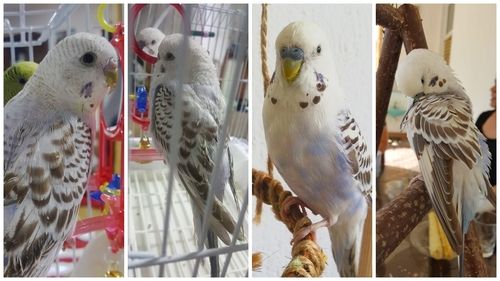 I want to share my budgie story, so it’s gonna be long, I hope you will enjoy! 😇

When I was little, I wanted to have an animal. However, the parents did not allow me to keep the animals even though we live in the village… Well, we kept the chickens and I loved them so much that I cried when they were gone. So my love for animals grew. I used to watch documentaries, cartoons about pets, etc. At school, I began to study English. I really liked English and learned new words every day. I even understand some words better in English than in Bosnian. Every day I was hoping for a gift, kind of animal. At least a fish or a hamster.

And thank God, after 7 years, my sister known as Džana bought a first pet, a budgie Jenna. She was named after her, of course. I called her Jenny. I didn’t know anything about birds even what this species of parrot was called. I was glad I shot with luck! I decided to create a YouTube channel. Of course, I didn’t know anything about YouTube either, but I soon learned. I wanted to keep the memories of my bird and that’s what I did. The cage was very small, neither had toys, nor we let her fly. We found out that she needs a partner, so we decided to buy a male. And so on November 2, 2017, my sister came back from town carrying Denny, the little budgie who is a star on social media today. Thank you!

As the days went by, he was beaten more and more often. I couldn’t do anything because the budgies are from my sister. Jenny attacked him because she didn’t like him. She beat him because she knew he was weaker, he was just a baby. Suddenly, Denny got sick one day … he couldn’t even fly. I couldn’t take him to the vet because we weren’t able to. So the days went by and so did the years. Denny is a year old. We celebrated his first birthday but he still couldn’t fly. I kept my birds every day. You supported me.

My parents begged me to sell the birds, but I did not consent because of so much love for animals. So every day I did my jobs, and besides school, I also took care of the birds. I collected money and sometimes I would ask anyone to take me to town to buy budgie toys and treats. But again, Denny started to feel bad. I didn’t know what it was. Denny was on the verge of death and then I finally got the courage and asked my mother to take him to the vet. He got medicine and the vet said Denny has a respiratory infection. I took care of him of course, and thanks God Denny is healed. I can’t keep him with Jenny because she’s aggressive.

Maybe I can get a new budgie for Jenny to leave Denny alone?

And yes, today I live with my mum, dad, and my twin brother. They started loving my birds, and my sister is now married. I got her birds as a gift and I love them so much!

Small bird in a Big World! 😄

link to Male or Female Budgie to have as a pet?

Yellow Budgie is rare same as Albino, but do you know how is a yellow budgie called? What makes them special? What is Lutino Budgie? You've been debating for a long time which type of budgie is...